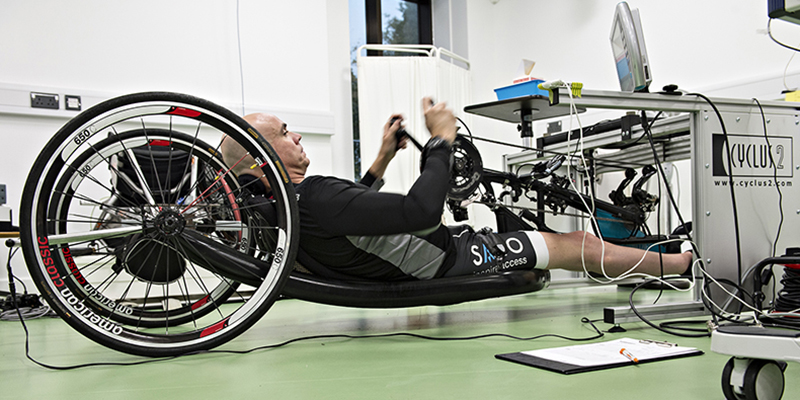 Recumbent handcycling is an endurance sport for individuals with lower and upper limb impairments. Performance levels have continually increased over recent years, which has largely been due to developments in technology with lighter, customized handbikes frequently used by competitive handcyclists.

That said, there are several components to a handbike that can be configured in a variety of different ways. The impact of handbike configuration on performance has been severely under researched, and subsequently further gains in performance could be possible, which was the objective of the current project.

The project first sought to understand which areas of handbike configuration were in greatest need of research and to determine what highly trained handcyclists did biomechanically compared to recreational handcyclists. This preliminary research identified that the horizontal positioning of the crank and the length of the cranks were of were of greatest interest to athletes and coaches and that highly trained handcyclists configured their handbikes in a way that created more trunk flexion and elbow extension than recreational handcyclists.

Subsequent research established that selecting a horizontal crank position between 97-100% of an individual’s arm length maximized their physiological economy. It was later revealed that the optimal crank length was dependent on handcyclists self-selected cadences. Those with a higher cadence were more economical in shorter 150mm cranks, whereas those with a slightly lower cadence benefitted from slightly longer, 160mm cranks.

This work was funded by the English Institute of Sport (EIS) and has been used to support the recumbent handcyclists from British Cycling throughout the Tokyo Paralympic cycle.